My Monstera deliciosa, when it was but a baby
now, both the wall and water tank are invisible
and I have to lift  leaves aside to sidle past it

it is taking up two thirds of my shade house! 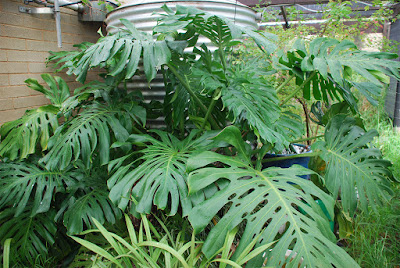 Ever since I first saw my first Monstera as a teenager,
I fell in love with it.
No idea why . . .
it was not long that I realised that it was Monstera deliciosa,
with the round holes it it's leaves that drew me, not the non
fruiting cut leaf plant that was so in vogue
as an indoor ornamental

it is doing well in my protected shade house
and brings a touch of the Tropics into my difficult, dry garden
in the driest State in the driest Continent
and has been fruiting now for a number of years

here is a cluster of four emerging flower buds 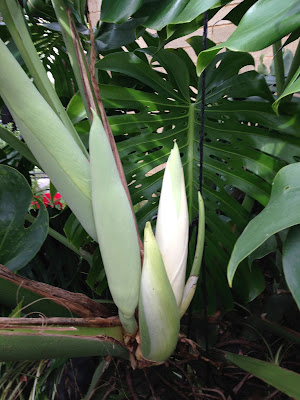 and the pristine, virginal flower,
already protecting the fruit in it's heart

in common parlance, it is called the fruit salad plant
as the fruit has flavours composed of pineapple, banana
and a variety of other tropical fruits 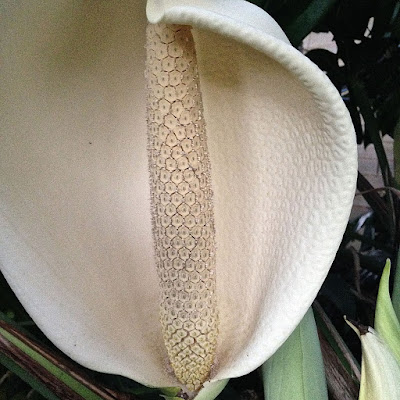 on the ripe fruit, the outer, green layer drops off,
revealing the luscious, edible bits inside.

a bit like eating corn on the cob except for the intense
sweetness and tropical flavour . . . yum 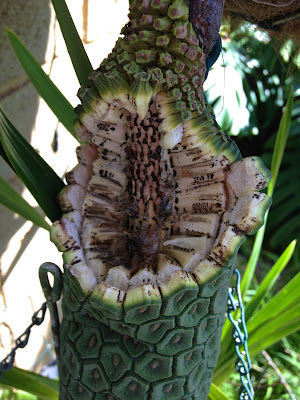 it took at least a decade of waiting for it to fruit,
this year I had 14 pieces of fruit and in 2 years time,
if I am still around, there are 17  buds and flowers
promising a glut of deliciousness.

If I stick around until I am 90, I'll be able to open a market stall!

Linking with
FLORAL FRIDAY FOTOS
TODAY'S FLOWERS, I Heart Macro
and OUR WORLD

when in reality, they are for my beloved mammi 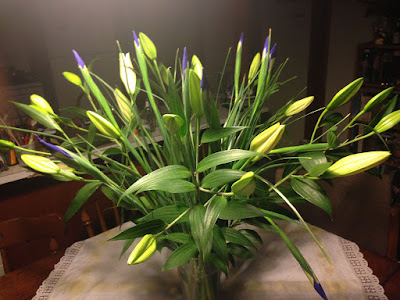 Serious and sombre, with no idea what life had in store.

My father, with a distinguished cross for
years of surgery on the Russian front
after being conscripted out of Medical School.

Naturally, after the war he had no right to practice
without a degree.

They made their living in the twenties and thirties
in whichever way they could.
Father, tuning and restoring pianos, as share farmers
and running a store in a small town.
This venture did not really prosper
since mother was too open handed to the poorest of the poor. 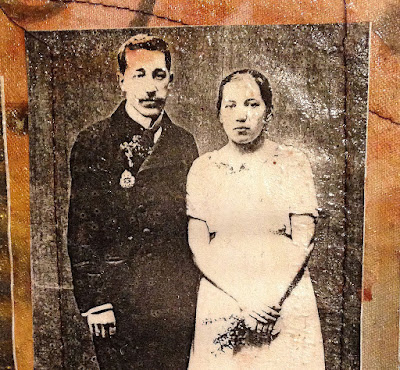 Later, father joined the police force and became a detective.
Mother meanwhile, had born him 5 children,
losing her firstborn doughtier to dysentery at the age of two.

When the Germans handed Latvia to Russia in the secret
Ribbentrop plot, my father was arrested and deported to Siberia
and mother became our sole support.

My elder brother was fighting for our country and badly
wounded in Lithuania, loosing a lung and a number of ribs
but, within weeks, was sent back to the front.

Mother, having studied languages at university,
worked shifts at the international exchange
at the post office.
Not easy juggling a job and three children
between 4 and 12
and finding sufficient food for her hungry, growing chicks.

In 1944, with the advancing Russian front on the horizon,
she packed up her chicks and what we could carry
and her trusty, hand cranked sewing machine,
and, after a 2 hour warning, we were on the last train
from certain death under the Russians
to a Germany besieged  and bombed from all sides.

While the war lasted, we were all separated and put to work,
happily in the same village. I was 7 and was shunted
from one place to another and had to help wherever I was.

Mother worked as maid to a publisher in his summer house,
a water mill, with running water under the kitchen.
Mother had mountains of dishes to do and got
very bad rheumatism and the hardest thing in my life I
had to do, was to pick a large bunch of nettles
and beat her naked back with them.

The surface pain took her mind off the unbearable pain inside.
Finally, she was carted off to hospital
in the nearest town.

Not knowing whether papa or my elder brother
were dead or alive was hard for us all, but mostly mother
for there was a time when she felt with certainty
that my brother at the front, had been killed.

Fear for all her children was ever present,
not just before the end of the war from the Gestapo
and the bombing
but after it as well, with soldiers of various armies
coming through and two young daughters to keep safe.

Then came the famine, we were in one of the
French zones
and the French really hated the Germans
and confiscated any food they could find
and sent it back to France.
There was little enough for the local population
and much less for us who had no contacts on the land.

Mother traded all her silver and linen we had brought
with us, except for her children's christening silver,
for food. Even so, she got thinner and thinner,
like a horse ready for the glue factory.
Every bit of nourishment she fed to her children
until survival surpassed fear from being sent back
to Latvia to a certain death
and we finally registered as displaced persons or DP's.
Shunted from camp to camp for two years
until we found a country which would take us.
Only Australia was prepared to take a parent over 45
and a child of school age, but at a price.
My younger brother, 19, and my 16 year old
sister had to come first and sponsor mother and me.

So we came to Australia, where people of working age,
had to work under contract for two years,
wherever they were sent by the government.

My sister was working as nurses' aid in a NSW
country town, my brother as dessert cook
at an army barracks and I went to school and
had to learn English from scratch.

Not being able to speak English, when travelling on
public transport, other passengers would sidle away
from us, as though we had the plague if we spoke.

At first we lived in a boarding house, three in one room
with use of tiny kitchenette and bathroom
while my brother slept under the front steps
with just a trellis separating him from trawling
perverts looking for young boys.

Mother, my sister and I all worked in a 'sweat shop'
while they both sewed garments, I was finishing them
after school and on Saturday mornings.

Every penny was scraped together until,
with another family we had enough for a deposit on a house.

A few years later, we sold our half and had a
deposit for our own house.

Oh the joy!
Mother planted apple trees, a birch and a fir tree
in memory of our homeland.
A grape vine shielding the porch,
berry bushes, roses and vegetables.
Just to get our hands into our own bit of soil!

My mother was a wonderful woman, respected and beloved
by all who knew her and I miss her
every day although she left us more than a quarter
of a century ago.

There is so much more to mother's story
but that would take a whole book. 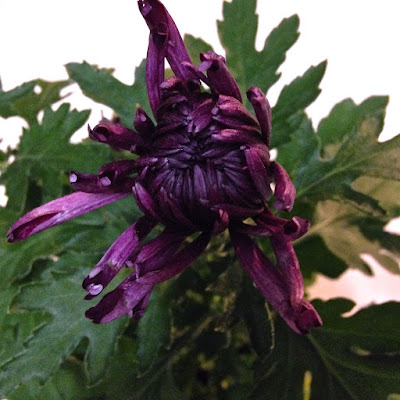 My DD gave me this almost black chrysanthemum
that actually smells like one too.
It seems the modern ones have the scent engineered out of them.

How boring the world becomes
when you do all this genetic modifying.

Linking with TODAY'S FLOWERS
OUR WORLD
and I Heart Macro 130
Posted by Arija at 7:00 AM 15 comments: