A Friend Who Joined Us For a While

Zachariah of the golden eyes came to call in the
night now and then....Millie our ancient black
Oriental, usually so territorial, would go outside
and chat with him. 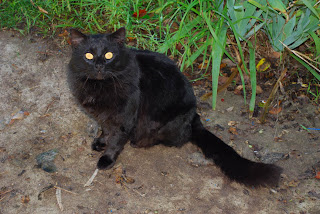 I put out some dry food for him, he was so scrawny ,
malnourished and had boils but would not let us near.
For weeks he would disappear, then come back again,
until one day our youngest granddaughter, with an
affininity to animals, made friends with him.
For a long time he was an outside cat slowly making
frieds with the two dogs and seven other cats.
He graduated to become a part time housecat, going
walkabout for a few weeks, then returning and picking
up where he had left off. He responded to Zachariah
or Zach for short. 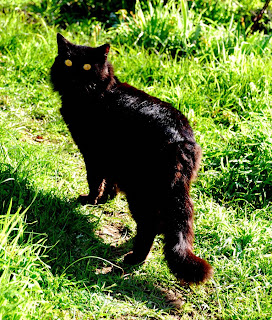 Zachie had the most wonderful amber eyes.
He was wormed, healthy and happy, but one
day he went on his rounds and did not return.
There are foxes and snakes here, and we miss
him so much...
*
Posted by Arija at 5:14 AM