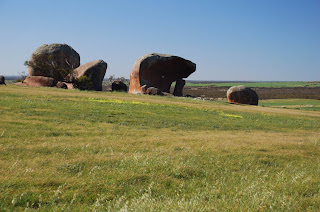 A two day drive will get us to the hundreds of miles
of exciting coastline. On the way there are a number
of other attractions, three of these are splendid and
very different rock formations.
Let me take you today to Murphy's Haystacks on a
small rise above an extensive flat agricultural plain. 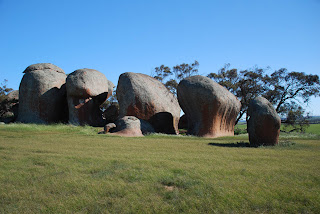 There are two large groups of these sandstone boulders
eroded at the base by sand blasting desert winds from
the north. 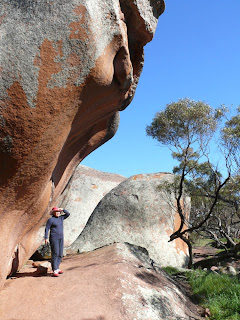 Just for size, marvellous me as seen by the Prof.
Mr.Murphy, being a provident man, liked to have his
assets set in stone even if they were made of hay. 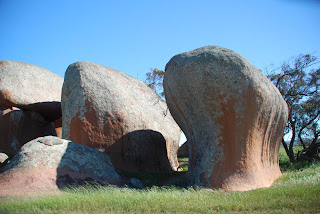 The erosion has occured beause of the general
land clearing for not very viable farming pursuits. 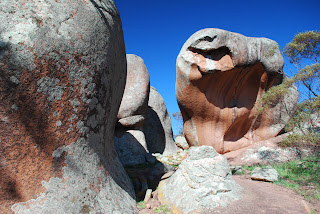 In historical times, the general tree cover would
haveprotevted them from the biting winds. 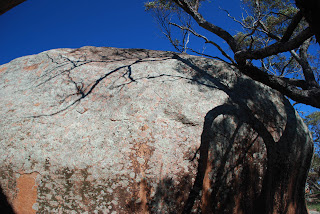 It is easy to lose an hour or two just wandering
around these amazingly shaped boulders. 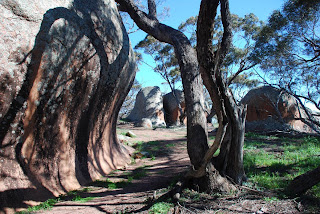 Discovering ever more interesting views while
wandering along well kept paths between shady
trees or marvelling at all the shapes and the
massive size of the different boulders.

My thanks this time are set in stone to the MY WORLD
team for creating this fun and exiting meme.
Posted by Arija at 9:02 AM