Last week I missed posting because we drove
over 1,000km to attend the 45th. annual general
meeting of the A.N.A.R.E. ski club. My husband
has been a member almost since it's inception, I
am only an associate member.
The initials stand for Australian National Antarctic
Research Expedition. The criterion for membership
is obviously, that one must have taken part in at
least one expedition. Members are quite diverse,
ranging from scientists through all necessary trades,
and, all expeditioners having undergone rigorous
psychological asessments, are easy to get along with.


My husband designed the lodge and made a model
from which an architect friend drew up the plans. We all
pitched in and spent many summers building it. From
the front there are two floors, from the back there are
three. Initially we had accomodation in the dormitory
for 12, four doubles and four singles. As regulations on
the mountain have changed, 6 more beds have been added.

The lodge is situated on Mt.Baw Baw in the Victorian Alps.

We arrived late afternoon and had a great view down the 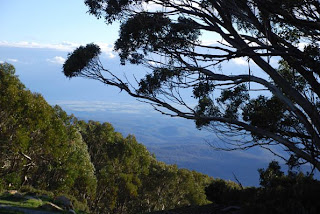 Would you believe it, during the night it snowed! 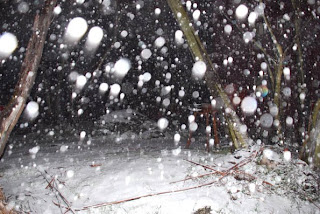 Now for those in the northern hemisphere that's

no big deal, but we're on summer time here.

None the less , we were thrilled. We had not been
up here for twenty years, so snow was a real bonus. 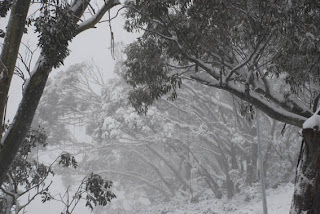 Here are the same trees as in the first picture,
only slightly more bent from the added load. 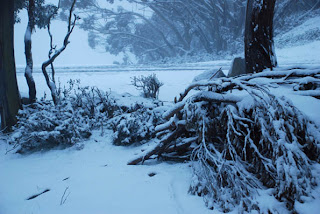 This blue shot was at dawn the next morning
just in case it all melted away again. 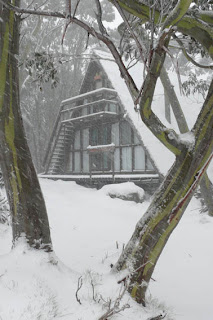 The lodge sitting pretty in the fluffy
white stuff. 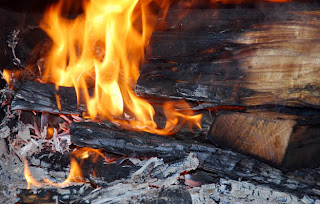 Meanwhile we were snug inside by the fire waiting
for the others to arrive. A happy reunion with those
of the old guard. After 45 years we were all a little
more mature and 20 years of absence had in no way
dulled old friendships.
Although the planned BBQ was out of the question since
it had a foot of snow on it, we all had a great time together. 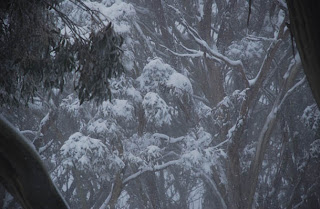 With these snow laden trees I feel Christmas is
just around the corner.
Next week God willing, snippets from the 1,000km
treck back home.

For wonderful sights and stories from around the
world, click on the logo on the right.
Thank you MY WORLD team for gving us this splendid
opportunity to post what is dear to us.
Posted by Arija at 3:01 AM