All photos were taken in consecutive order in
the space of 20 minutes!

The sun just dropping down behind the hill.

Turn your head a little and the sky is a deep
blue with drifting balls of fluff,

a little more, and the attack comes in spearhead
formation
as the cloud war in the skies veers and shifts

some will 'o the whisps chasing each other

meanwhile, the sun has had enough of it and
done a disappearing trick!

leaving the moon in charge of the sky, but not
completely, those raging clouds still have some
say in the matter

as, seconds ater, they fight for supremacy with
the moon 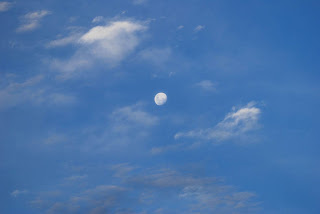 while yet again the sky changes it's character as
a boat of dreams sails into the unknown.

Just too much for one worn out shutterfinger,
I leave it for the birds.

To sail the skies with other clouds, click on the
Skywatch Logo on the right.

To Klaus and the team, my heartfelt thanks for
organizing this inspiring meme.
Posted by Arija at 4:40 PM