I suppose we must occasionally have days like these . . .

A stormy sky and golden light on the paddock
what's wrong with that? 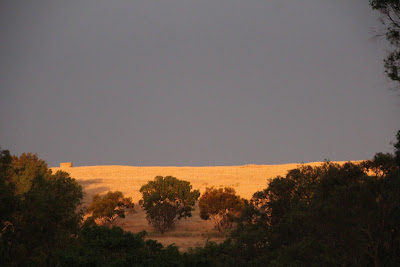 For one thing, the temperature was hovering around 100F,
the winds were fast furious and had a mind of their own
and the whole state had a blanket total fire ban.

In this virtual oven, I had to drive for an hour to my specialist's
rooms. When I got there, with the scar standing in the searing heat,
I cleverly looked my keys in it.

Having membership in the Royal Automobile Association,
it only took an hour and a half for them to come and break into my car.

Meanwhile, the verdict at my physicians was not a good one.
My heart had markedly deteriorated in the last six weeks since
I saw him.

After this disappointment, the long hot drive home.

Just when you think things are starting to look up,
life throws a spanner into the works.

Hope you are all having a much nicer time!