Here at last is the promised continuation of the
beginning of the River Torrens half a mile
downstream from its slightly more pristine look
in my previous post. 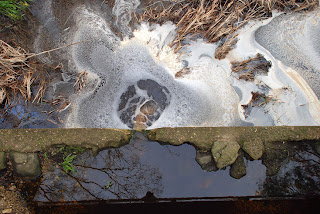 What a difference a little distance plus a township
make....the sky and trees still reflect in the still pool
but where the water falls not much more than 6",
other very pretty pictures form, though they are rather
unnerving to consider. 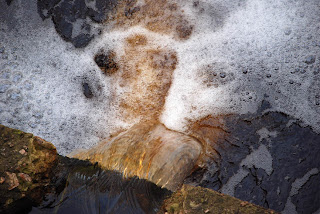 Like turning a kaleidoscope, the patterns of foam and
scum swirl and change.... 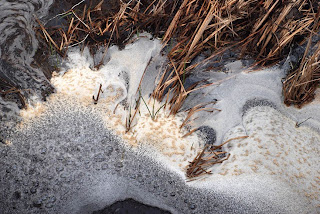 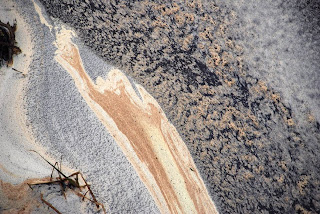 to the rainbow sands of famed beaches. 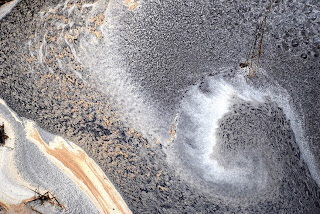 All photos enlarge both for greater enjoyment of the
patterns and impact of the horror of the pollution in
such a short stretch of the river's progress. 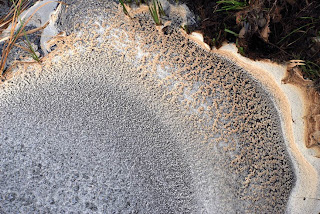 Had someone painted this, you would hang it on the wall,
knowing what it is, makes you want to weep for a civilization
that is murdering the bounty of our planet which has
enabled its very existence. 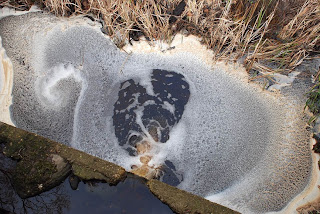 We cannot rely on others to rectify the situation.
Laws and fines have little effect and only apply to big
corporations although their economists often work on
the principle that it cheaper to pollute and pay the fine
when/if caught, than to dispose of hazardous waste
responsibly.

The way forward I see is for the individual to take control
of his own patch and by example show that it is possible to
live in balance with ones surroundings without recourse
to the arsenal of chemical consortiums that blithely sell
what is banned in one country to an unsuspecting poorer one. 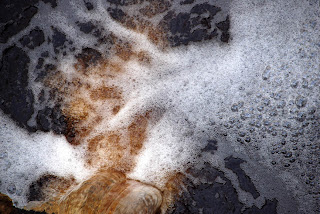 That is the reason we have amassed four congruent
properties so that at least these 500 acres can revert
back to a viable, self-sustaining existence.
Next week, God willing I will show you what looks like
scum but proves the health of our dams. May the gods
smile on you till then.

Now, click on the logo and float down some other river...
Thanks to 2sweetnsaxy for being a brick and organizing this meme.
Posted by Arija at 5:45 PM