It was stormy on the mountain .... 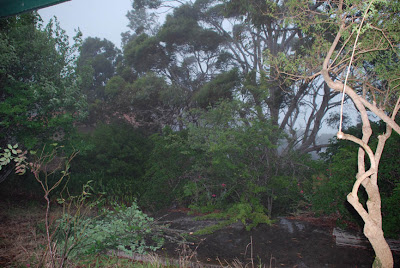 we unlocked the door, went in to turn off the alarm ......
the dining room was unrecognizable, the floor strewn with
the rose petals of the bowl of potpourri, the board blocking the
fireplace on the Persian carpet, soot everywhere .... and
two charred bodies in the fireplace!
*
Sherlock Holmes, Hercule Poirot, Inspector Morse, Inspector
Barnaby and Frost arrayed themselves behind me to solve this
mystery. I could have used Inspector Rex as well ...
I started rubbing the little grey cells together, discarding all
unnecessary information a la methode Holmes, put my nose to
the ground and my fingertips together.
*
The small sitting room opens from one of the three doors of the
diningroom. Near the open doorway, a number of antique books
had fallen from the high shelf over the doorway scattering across
the floor.
*
While the Prof toiled at restoring order, your trusty correspondent
deducted .... two dead possums in the fireplace, one brushtail, one
ringtail. The alarm people had rung us the day before that the alarm
in the dining room had gone off. We had been there less than 24
hours previously.
*
So, what had occurred?
*
Regarde mes amis! Only one sulution applies ... an act of God.
You do not believe me? But it is quite obvious. Lightning strikes the
chimney, the two possums are blocking the flue in an angle thereof,
the force of the lightningbolt propells the possums into the fireplace
and chars them and blasts out the board covering the fireplace. The
blast shakes the the wall so the books fall down.
*
The mystery is solved, the storm prevails, the rain comes
sheeting down.
* 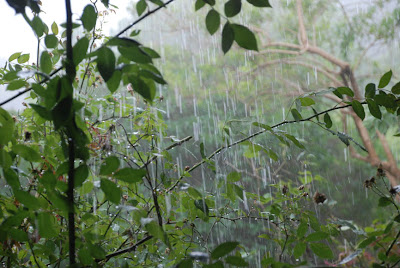