Last night my granddaughter, not knowing what else to do,
brought me this badly damaged nestling. 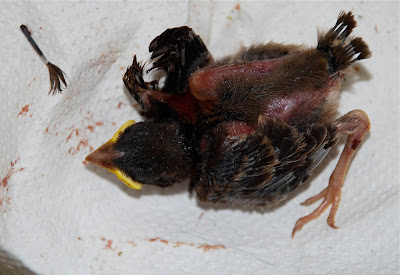 Obviously fallen out of the nest in the dreadful winds we had
during the day and later having to be rescued from one of the
farm cats who mistook it for a toy. You can see how badly
hurt it was by the blood on the tissue and one of the
dislodged quills.
Bleeding, and with a wing in a most unusual position, we really
did not expect it to live more than a few hours.
It's parents had fed it well and with the shock, food was the last of
it's worries. I gave it a Reiki healing for about an hour and we both
went to bed.

By 3 o'clock in the morning, it was clamouring for a feed. Having
nothing in the pantry and guessing it was a meat eater, I fed it 3
small moths that were attracted to the outside light.

This morning it was bumbling around in it's box and yelling to be
fed. We have had 37 C temperatures and searing, gusting winds
for some days, also no water for the garden and finding a worm
was nigh on impossible. After much frustration I finally located one
under a large planter box.

Birdie gobbled it up, no sweat!

I have narrowed it's identification down to blackbird or starling and
am veering towards blackbird. It's eyes are still closed and it's fate is
definitely uncertain but I am giving it all I've got and only time will
tell where we go from here. Meanwhile, it seems to be a feisty little
thing.

Even if I manage to pull it through, due to it's physical disabilities it
will never be able to return to the wild, but at least it may yet have a life.

Late this afternoon birdie succumbed to his injuries.
My mother used to say "I'd rather die on a full tummy than an empty one".
This, at least, he did.