As I was concentratedly endeavouring to capture the madly
mating dragonflies on the pond in the park, I was shocked to
hear the thunder of hoofbeats behind me. While turning to
see I thought 'but the horse is in the other paddock and why
this mad gallop?'
Startled, I saw a 7' kangaroo coming down at me at full tilt.
He did not see me,and veered around the bank not 3" away
from me. 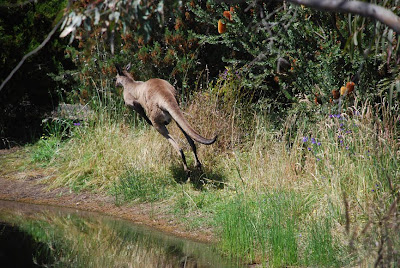 I got the camera to my eye and started snapping but sometimes
stopped in sheer amazement at his great bounds and speed. He
had taken the fence behind me in one huge leap, clearing it by
well over 1', a real candidate for the olympics! 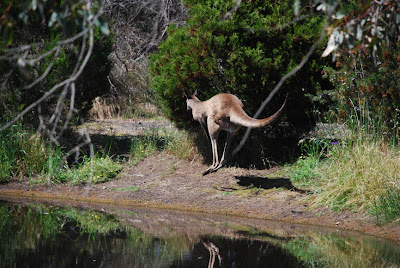 I was lucky to catch him doing 'airs above the ground' in this
one and bounce like a ball off the ground. 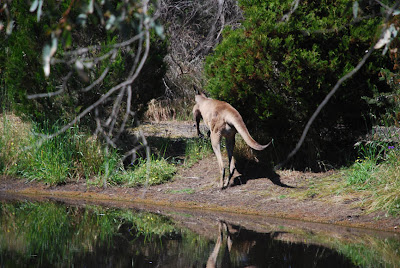 In the 18 years we have had the farm and have been planting
wildlife corridors along our road verges and establishing some
Eucalyptus plantations, the kangaroo population has escalated
in quite an alarming way, to the point of the council putting
up kangaroo warning signs of which the roos take no notice
whatsoever. 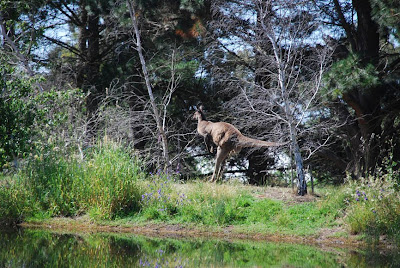 Having rounded the pond, here he is disappearing into the
trees on the far side and about to sail over the next fence. 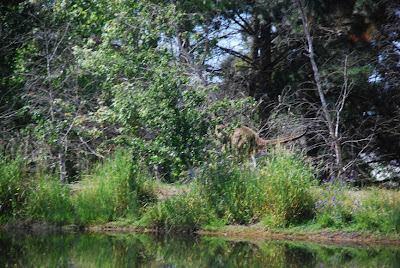 Much as I love to see the natural inhabitants of this land
returning and do not mind sharing the pastures with them,
they do great damage to our fences. The big ones just take
them in their stride but the smaller ones break through
them in so many places that they have become like sieves and
our sheep wander where they will and can easily stray from home. 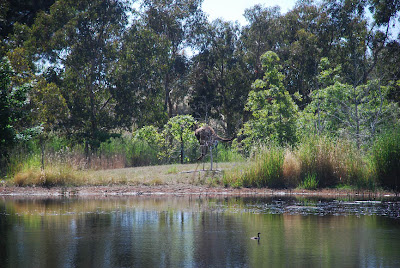 Just the tail end still showing and one of our resident waterfowl.
All photos enlarge if you wish to see the majesty of this beast.
Thanks to Michelle of Rambling Woods for hosting this meme.
Do click on the Nature Notes Logo and see the other entries.
Posted by Arija at 5:37 AM